Local organisations Ideas Test and SparkedEcho are bringing new folk songs to Sheerness written with and sung by people from North Kent.

Songs range from the energetic The Dockyard Rush to the enigmatic Hidden Powers, and tell the stories of Kent’s historic relationship with the sea and people’s hopes for the future in the face of changing tides.

Support is from local folk band The Flowing with guest Russell Jemmett.

And a special free finale performance:

ALL PERFORMANCES ARE FREE 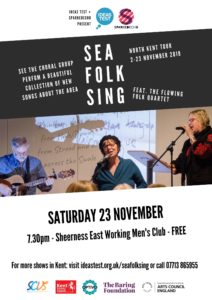 For more information call Ideas Test on 07713 865 955
email us at contact@ideastest.co.uk
Visit our website at www.ideastest.org.uk