An Eastchurch man is £4,764 out of pocket after waste was dumped in Leysdown.

Lee Jacobs, of Cheyne Road, was prosecuted by Swale Borough Council following an investigation into a large quantity of waste found dumped
on Shellness Road in October 2016.

The council identified that Jacobs had been paid to remove the waste from a building site and when asked to provide his authority to carry it, and waste transfer notes for the load that was deposited illegally, he failed to do so. 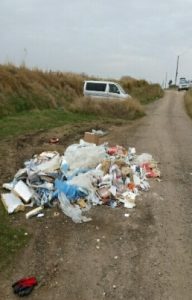 Jacobs pleaded not guilty to two charges – failing to produce his authority to transport controlled waste, and failing to produce waste transfer notes – but he failed to turn up at the trial and when Magistrates were presented with evidence from the council’s
investigation, he was found guilty of both offences.

Cllr Alan Horton cabinet member for safer families and communities at the council, said: “We are delighted with this result. The council spend significant sums of council taxpayers’ money every year clearing up fly-tipping.
“Anyone transporting someone else’s waste on the highway must be registered with the Environment Agency to do so.

“The council has an excellent record in tackling waste crime. In this case, we were able to trace the waste back to the defendant, and
prosecute the offender. 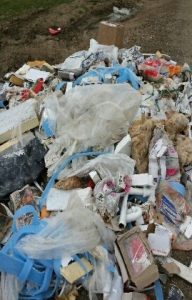 “Responsible carriers know the rules, and I urge people to be wary of those offering to get rid of waste cheaply – if it’s dumped, you could be prosecuted for failing to take reasonable steps in preventing a fly tipping incident.”