Hundreds of nervous Year 11 Pupils finally received the news they had been waiting for, as GCSE exam results were officially announced this morning. Schools across Sheppey & Sittingbourne opened their doors to allow students to find out the outcome of their summer exams, despite national figures revealing that the overall pass rate was down slightly, because of the introduction of the new number grading system that saw subjects such as English, English Language and Mathematics replace the traditional A-F grades.

BRFM was at the Sittingbourne Community College this morning as the doors opened at 10am, watching as crowds of Year 11 pupils filled the school’s Bourne Hall to collect their white sealed envelopes. The School based in Swanstree Avenue in Sittingbourne, saw pupils filled with emotion as they opened their results in front of fellow students and staff. Among the students, Mitchel Horn, 16 received a “distinction” in his NCFE Food Technology course & tears of joy revealed an A grade for Renate Kmito for her GCSE Art & Design Exam & Coursework.

Other schools across the BRFM region also celebrated high results including the Westlands School where pupil Catherine Macauley was among the first exam takers to achieve the new top mark of 9.

She received the highest possible grade – the equivalent of a high A* – for English literature. And she landed 8s in both English language and mathematics, as well as three A*s, an A and two distinction’s.

Overall, pupils performed well in mathematics, with 139 out of 270 getting a 5 or above and 199 pupils achieving 4 or above. A 4 or 5 would be the same as a C. And 170 pupils received a 4 or above in either English literature or language.

Head teacher Simon Cox said he supported the new 9 to 1 system because it meant top pupils could stretch themselves to gain the higher grades.

Whilst the head teacher of Fulston Manor School in Sittingbourne says he has converted the new numerical grades back into letters due to the “extremely confusing” system.

Alan Brookes said he decided to take the step because just English and mathematics were being graded using the new 9 to 1 marks, with other subjects set to follow suit by 2020. 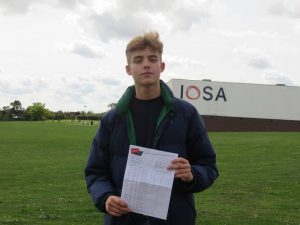 le of Sheppey Academy celebrated huge success this morning when pupils such as Mitchell Goymer revealed 11 GCSE’s, 7 of which were grade A’s  and a top grade of 9 in English.