Greenpeace volunteers in kayaks and boats have boarded a 23,498-tonne ship on a major import route bringing Volkswagen diesel cars into the UK. The clean air campaigners drew up alongside the huge car carrier in the Thames Estuary around 8.30am this morning. They are now hanging from the 27-metre-high unloading door and say they won’t disembark until VW commits to take its toxic cars back to Germany.

Simultaneously, over 40 volunteers have scaled the fences at Sheerness port in Kent – the intended destination of the ship – and gained access to the vehicle park, where several thousand VW cars are awaiting distribution to suppliers.

The volunteers, including many mothers, fathers and people from all walks of life, are attempting to immobilise all of the VW diesel cars by removing the keys. They are also lifting the bonnets and labelling the engines with messages from 8,000 people, including many car owners, calling on VW to ditch diesel.

The German car giant imports tens of thousands of vehicles through Sheerness, one of Britain’s largest car ports, every year. [1]

Only last week, independent testing commissioned by Greenpeace showed one of the company’s most iconic diesel cars, the VW Golf, emits over two times more toxic pollutants than the manufacturer’s tests when driven on a busy urban road.

Janet Barker, 38, a support worker, from Powys, Wales, and one of the volunteers taking action, said:

“Diesel cars are toxic – so we’re here to block VW imports on behalf of all of the children who are the most acutely affected by the health impacts of diesel fumes. VW’s polluting vehicles are adding to a public health emergency harming thousands of people.”

Two years ago VW was caught cheating on emissions tests, but despite VW’s attempts to look like it’s moving to electric, it still has no plans to ditch diesel.

Barker continued: “The Government says we need to wait another 23 years for dirty diesels to be banned. We can’t wait that long. So we’re stepping in and seizing all of VW’s diesel cars to stop them harming people’s health and the environment. We’re not leaving until VW takes its toxic cars back to Germany. As Europe’s largest car maker, VW needs to wake up, smell the emissions, and go fully electric.”

The impact of air pollution is particularly acute for children, with research showing negative effects for lung function, respiratory issues like asthma and even stunted lung growth. [1]

Campaigners have hung a 50sq/m banner on the ship’s unloading ramp showing the face of a two-year-old girl covered by an air pollution mask. Sephie, who has respiratory problems, represents all children affected by air pollution. Pennant banners emblazoned with Sephie’s portrait have also been hoisted on gantries surrounding the vast car park.

“My daughter Sephie has developed severe respiratory problems which can render her housebound for a week at a time. The wealth of evidence connecting air pollution to respiratory problems in children is now overwhelming. Our country’s children, like Sephie, are developing real health issues across our cities made worse by air pollution. Unless we ditch diesel, we could end up with a whole generation of children with damaged lungs.”

Professor Jonathan Grigg, a leading expert on the impacts of air pollution on children’s health and the founder of Doctors Against Diesel group said:

“We know that air pollution and diesel emissions can greatly impact children, from childhood lung development to asthma. Given the scale of the air pollution problem in London, it’s sadly predictable that we’re seeing so many children across the capital, like Sephie, suffering from respiratory problems. Drastically reducing diesel emissions would immediately reduce children’s exposure and improve their long-term health.”

Levels of harmful nitrogen dioxide air pollution in the UK have broken legal limits every year since 2010 – and diesel vehicles are responsible for 80% of toxic NOx coming from roads. Yet in its long-awaited air pollution plan, the government has set out no action on diesel cars before a ban in 2040 – nearly a quarter of a century from now. [3]

The UK government and auto industry have hailed the recent introduction of so-called ‘real-world’ emissions tests as the solution to the air pollution crisis. Yet a Greenpeace investigation published last week revealed that the new tests could still be underreporting diesel cars’ real emissions and may not stop vehicles from polluting over the legal limits when driven in urban traffic. [4]

A class action against VW over the emissions scandal has attracted more than 35,000 UK claimants. 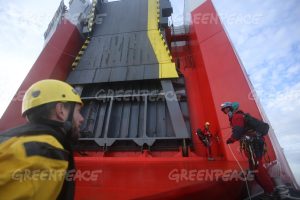 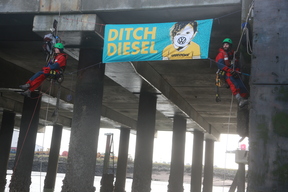 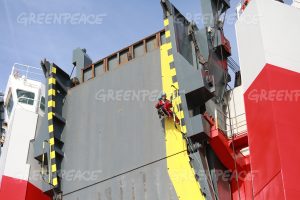 Environmental protesters have climbed on to a ship at a Kent port transporting diesel cars from Germany.

Greenpeace said campaigners had boarded the ship at Sheerness in Kent and were preventing the unloading of the cars.
The group said it would not leave the ship until Volkswagen agreed to return the cars to Germany.
More than 40 people are “attempting to immobilise all the VW diesel cars by removing their keys”, a Greenpeace spokesman said.
Kent Police said it had received reports of a protest at the Port of Sheerness at 08:52 BST and officers were at the scene. 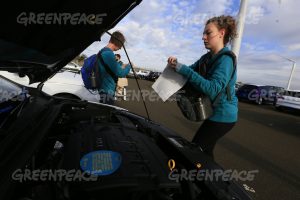 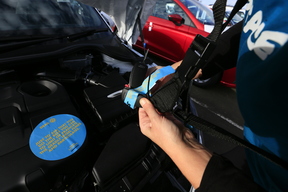 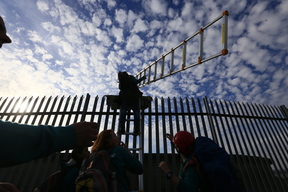 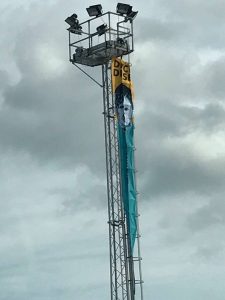 The vessel, Elba Highways is currently anchoring back out in the estuary waiting for authorities to clear the dock and/or take action. 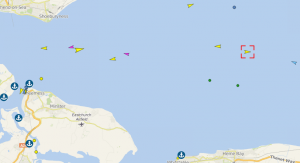 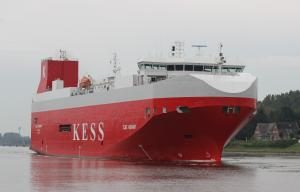 Over 300 caught by Sheppey Crossing cameras