A blue roan cocker spaniel named Huckleberry has been given a new lease of life after being abandoned near Selling. Swale Borough Council’s dog warden received a call from homeowners in Selling after finding an abandoned dog curled up in their outside log store.

The dog warden, who named him Huckleberry, collected the very thin dog and took him to Karebear Kennels in Gillingham where upon arrival he appeared to be jaundiced and very sick. Staff from the kennel rushed Huckleberry to Newnham Court Medical Hospital in Maidstone where, after two days of exploratory tests, he was diagnosed with Leptospirosis. This caused his skeletal frame and jaundiced complexion, along with a nasty eye infection and ulcerated mouth with black rotting teeth.

Leptospirosis can be a fatal disease that is caused when dogs encounter the urine of an infected animal, often a rat. The hospital made a swift diagnosis and began Huckleberry’s lifesaving treatment, which was paid for by Leicester based charity Spaniel Aid UK who help care for spaniels in need across the UK.

“We are so pleased we were able to pull together a cross-organisation effort to bring Huckleberry back to life.

“He was so thin and close to death when we picked him up, and if it wasn’t for the quick actions of the kennels, and generous funding from Spaniels Aid UK, Huckleberry wouldn’t be here.

“We want to thank the residents who alerted us, the kennels who rushed him to hospital, the hospital for their wonderful care, and Spaniel Aid UK for their life saving funding.

“We haven’t seen a case of Leptospirosis in the borough for more than 13 years, so we are glad we got to Huckleberry in time.

“It’s been so cold overnight recently, we don’t know how he survived on his own, he’s a very brave and loving little dog.”

“When we received the call from the council’s dog warden, we were eager to help little Huckleberry.

“We’ve paid close to £3,000 for his urgent care at the hospital, and his ongoing care to bring him back to full health will likely cost an additional £3,000.

“Huckleberry is currently on his way into his new foster home and we’re looking forward to seeing him flourish in the coming months.

“It’s been a pleasure to work alongside the council’s dog warden service and the vets at Newnham Court Medical Hospital to help Huckleberry. A true team effort.

“We wouldn’t be able to help dogs in need without the support and donations from our wonderful followers. Thanks to them we can step in and help dogs like Huckleberry.” 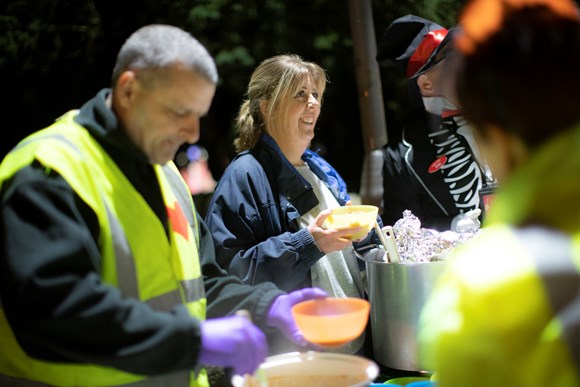