The Sheerness RNLI lifeboat was launched to assist a pleasure cruiser which was stuck fast after crab pot lines fouled its propellers. (12th May 2018) 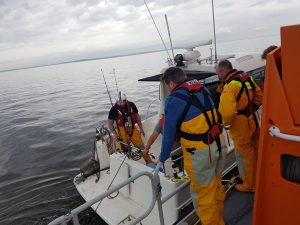 The volunteer crew of the Sheerness RNLI all weather lifeboat ‘The George and Ivy Swanson’ launched at 5.32pm on Saturday 12 May after a call from the UK Coastguard reported that a 28-foot pleasure cruiser, the ‘Ellie May’, with two men on-board, was disabled and at anchor just south of the Red Sands Towers.
The craft had fouled its propellers in the lines from a string of pots and was being held fast to the sea bed.
The ALB arrived on the scene at 6.07pm and crew members managed to cut the lines and free the casualty from its predicament, but with rope still entangling the propellers the craft was safely under tow at 6.22pm and taken to the Lower Camber in Sheerness docks where further attempts were unsuccessfully made to free the fouled propellers.

The craft was moored in the Camber overnight with the owner having made his own arrangements to have it towed back to Gillingham the following day.
The ALB was back on its mooring at 8.37pm.

Report/Story sent to BRFM courtesy of the Sheerness RNLI