Roundabout on it’s way, but will it send the Island round the bend as major roadworks begin?

Works will begin to create on new roundabout on one of Sheppey’s main routes in just a matter of weeks according to Kent Highways.

Bosses at Kent Highways have announced that the £6.6m works will begin on Monday 25th June at the junction of Barton Hill Drive, where a no right turn rule was put in place last year. The first part of the works to install a four entry/exit roundabout, which will replace the current traffic lights and is expected to be on-going until at least January 2019. 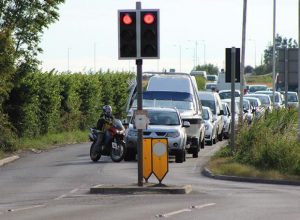 A 12 week road closure at Barton Hill Drive is planned to take place in August to year to allow workers to link the newly installed roundabout to the existing busy lower road, resulting in drivers being diverted through Thistle Hill Way & Plover Road, where parking restrictions will be in force.

The second and final phase of works is set to being in March 2019 will see the Lower Road widened, which is expected to be on-going until December 2019.

More in-depth details are expected near the time of each phase.