Christmas Fayre draws in the crowds in Milton Regis. 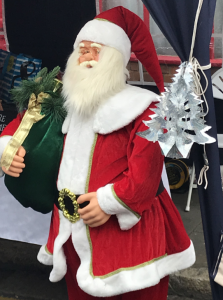 Happy shoppers turned out despite the rain, from 11am this morning to be greeted by festive music, craft & gift stalls, refreshments, artwork, bouncy castle and a Santa’s Grotto. The event organised by the Three Hats pub, was to encourage the community to gather and prepare for the festive period locally. Craft stalls lined the high street selling festive favourites such as advent candles & calendars, tree decorations, bags, purses, plaques, festive foods, also present were stalls selling hot drinks, doughnuts & ice-cream. The main attraction was the Three Hats pub which had be transformed into a festive wonderland housing Santa’s grotto, inviting children to visit Santa to let him know want they wish for this Christmas. 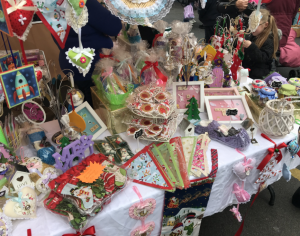 Visitors told BRFM, “It’s a great way to spend a Saturday and something completely different for Milton”
Another shopper said “It’s great to have something local to this part of the town, and the Three Hats have done a superb job”
“It’s great to see so many in Milton again” Said one Milton resident.

It is not yet known if this will be a annual event for Milton, but overall opinions would favour the decision and would be hugely welcomed by the residents of Milton Regis. The Three Hats usually are part organisers of the High Streets Saffron Fair traditionally held in June of each year, which attracts many visitors to Milton. 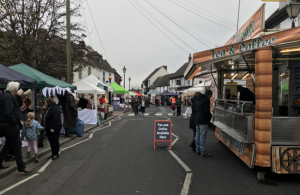 Over past years, Milton had its own Christmas Lights display, like many of the large county towns, despite only be a very small high street. Many residents from Milton, Sittingbourne and surrounding villages would gather on a Saturday evening in December to see the lights display switch-on outside the “old Court House”, Festive lights and trees would decorate the high street from one end to the other, brightening up the area, but unfortunately due to funding and lack of support Milton Christmas Lights were switched off for good in the late 1990’s. So a Christmas fair today brought back the tradition Christmas feel to the Milton Regis.