A new drop off point for buses and taxis at a Sittingbourne secondary school has had a “transformational” effect on traffic in neighbouring roads.

The new drop off point at the Sittingbourne Community College is in full operation and replaces the old collection & drop off point at the front of the school in Swanstree Avenue, the new site, situated off of the A2 at the top of Fox Hill, means buses and taxis can drive into a specially designed area for the school pupils to be dropped off and walk safely to the main school area.

Seamus Murphy, executive head, said “The drop-off point has been completed and it has been transformational”
“The bus depot is now much safer for pupils and the local community”

Between 2:15pm & 3:30pm each day, traffic would snarl up around Swanstree Avenue making it very difficult for traffic to travel past the school, the depot has now freed up the area. 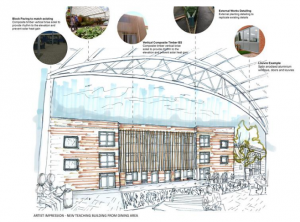 The drop off point is part of a new £6m extension at the Sittingbourne Community College (SCC) which will see its numbers increase from 1,275 pupils to 1,575 by 2020, work begun on the extension in September, with the demolition of a former mobile set of classrooms which is making way for a new 3 story suite of classrooms to house the Maths department at the school.

The expansion, which was rubber-stamped by Kent County Council in October last year, is necessary to meet increased demand for school places.

Other building projects have also started at the school over recent weeks, with contractors moving in and groundwork beginning at the centre of the school which is expected to be completed in 18 months.