Plans to convert the historic water tower in sheerness into flats have finally been agreed, three years after being submitted.

The plans were put forward to Swale Borough Council in 2014, to convert the derelict tower in Trinity Road, and to build a new 3-storey housing block next to the historic landmark.

The plans have shown 29 flats & maisonettes, seven of which would be spread over 3 floors, with 27 allocated parking spaces.

The owner who purchased the plot in 2014, has ensured Swale residents that he would “preserve the deteriorating tower” which was built in the mid 1800’s. He also said “It’s taken us three years to get permission, now we will stick to our plans to revive the town centre”

“As it is, the site is looking very deserted so, hopefully, once it has been redeveloped, it will bring something new to the town and, although it won’t bring the water tower back to life as such, it will be a building for people to admire and remember.”

Over the years, various ideas for the building have been suggested ranging from a cinema and nightclub to an art gallery, farmers’ market, restaurant and flats.

But now the site will see the tower restored and used for housing.

Plans below, show how the tower and new housing blocks will look like. 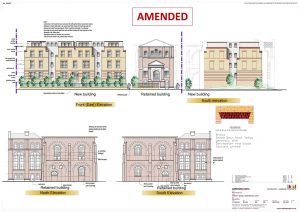