Plumes of smoke from field of fire

Firefighters are currently tackling a huge field fire near Sittingbourne this afternoon.

Crews raced to the scene of the blaze, which is in the Rodmersham area of the town, just before 3pm.

A spokesman for the fire service said: “Kent Fire and Rescue Service Emergency Control Centre received a number of 999 calls reporting that a large quantity of standing corn in a field adjacent to Highsted Road, Rodmersham was alight. 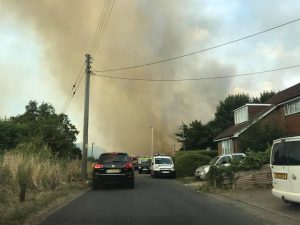 “Firefighters were immediately sent to the scene and at the height of the blaze around 30 firefighters, six fire engines and an all-terrain vehicle (ATV) were tackling the blaze.

“Fire crews are working in extremely hot and arduous conditions to bring the blaze under control and the incident will shortly be scaled down to the ATV and two fire engines.”

The news comes less than 24 hours after a senior firefighter from Kent Fire and Rescue Service issued an urgent appeal for people to be extra vigilant during the current hot weather to protect the county’s countryside from fires.

Although Swale experienced a good amount of rain last weekend; the sun, dry weather and high temperatures are back and have returned the borough to dry conditions and increased the risk of outdoor fires.

Assistant Director Channel Tunnel and Resilience at Kent Fire & Rescue Service, Paul Flaherty said: “There is a real danger in these very dry conditions of fires having a devastating impact on people’s lives, homes and livelihoods.

“I want to appeal to the people of Kent and Medway and our visitors to be extra vigilant to prevent outdoor fires on what is now tinder dry land, caused by the second coming of this summer’s heatwave.

“Whilst there’s a real need to be vigilant, there’s also a need to be sensible and responsible too.”

Crowds gathered in the surrounding roads, as plumes of smoke billowed from the field, BRFM was at the scene and saw the flames just meters from the roadway, with cars quickly moving to get out of the way of the spreading fire and to allow emergency vehicles to access the area. A JCB was seen entering the field with it front bucket filled with water to help control the fire.

Homes close to the scene are being asked to keep windows and doors closed this afternoon due to the large amount of smoke.

Clouds of smoke could be seen as far as the M2 and from the Isle of Sheppey.