Strong winds cause damage across Swale

Thursday morning strong winds have cause damage and travel problems across Swale.

Strong gusts of winds have caused damage and travel misery during this morning’s rush hour across Sittingbourne & Sheppey.

Strong winds brought down part of a farm building on Sheppey and fire-fighters were called to Warden Bay Road shortly after 7am, after burning embers from a bungalow chimney blew into undergrowth in a nearby garden. However emergency services were delayed due to a side wall from a farm building have collapsed into the road. The area was cleared by 7:45am.

The Sheppey Crossing was 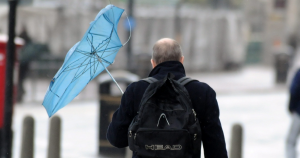 forced to close during the school run this morning, causing delays to some Sittingbourne school students, forcing drivers to use the Kingsferry Bridge to leave the island resulting in delays around the Lower Road from Barton Hill Drive.

In Sittingbourne, a football club is counting the cost of damage this afternoon caused by the strong gusts after reports of its changing room’s roof was ripped of by the winds. Woodcombe FC’s Murston Park ground in Church Road, Murston, discovered the roof of its changing rooms had landed in the car park earlier this morning.

What remains of the building is currently being made safe as boilers, pipe work & electrics have been left open to the elements of the weather.

Volunteers are trying to secure the site and provide some kind of covering as the club is due to host about half a dozen games this weekend.

The roof, which was installed about three years ago following a fundraising drive, is also being dismantled.

Woodcombe are now appealing for any help from locals, if they can spare a few hours to help clear up and repair the damage they are invited to visit Murston Park.

Back on Sheppey, rail commuters were faced with delays this morning after a metal fence panel was blown on the tracks at Sheerness, causing a replacement bus service to be put into force until mid-morning.

Around the county, strong winds have caused fallen trees, blocked roads and damage to buildings. The QE2 river crossing at Dartford was forced to close during the night and re-opened earlier today after winds calmed.

The calmer weather is se to continue this evening with lows of 6°C and occasional showers, and tomorrow (Friday) is expected to see the return of sunny spells and highs of 7°C.