Swale commemorates the Battle of Passchendaele

Swale commemorates the Battle of Passchendaele.

On Sunday 30th July, Sittingbourne held a service of remembrance for those who lost their lives in the “Battle of Passchendaele” in 1917.

Passchendaele is the name commonly given to the third battle of Ypres fought in Belgium in the Summer & Autumn of 1917. It was conceived by General Haig in order to gain control of the ridges overlooking the Ypres Salient, with the intention of continuing in a breakout and advance up the Belgian coast.  Passchendaele was a small village, which lay on the last ridge east of Ypres, 5 miles from a railway junction at Roulers.

Crowds gathered at the war memorial in Central Avenue, Sittingbourne just before 11am. The service was organised by the Royal British Legion & the Historical Research Group of Sittingbourne, whom welcomed guests including: Paul Auston from Her Majesty’s Deputy Lieutenant of Kent, Colin Prescott the Worshipful Mayor of Swale, John Roberts the Rear Admiral of the Royal Navy and local historian Jerry Cooley. The ceremony, led by the Royal British Legion Chaplain Pat Tatchell added a religious feel to the service with hymns & prayers. Local historian Jerry Cooley spoke about the historical setting of Passchendaele and to recognise the sacrifice made by the community of Sittingbourne and it’s surrounding parishes during the great war (1914-1918)

During the service a full list of names was read out of those who lost their lives in the battle between July & November 1917, as members of the Navy, the Royal British Legion, The Salvation Army and the Sittingbourne Historical Group placed wreaths & crosses at the town’s war memorial. A 2 Minute Silence also took place to remember the fallen and those who survived. The Exhortation was read aloud to the crowd to end the service “They shall grow not old, as we that are left grow old, Age shall not weary them, nor the years condemn, at the going down of the sun, and in the morning, We will remember them”

To find out more about the Historical Research Group of Sittingbourne visit their website: http://www.hrgs.co.uk/ 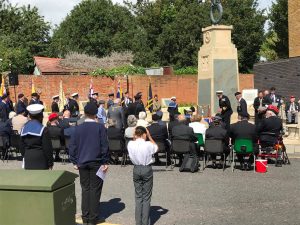 Volunteer Celebrated at Thank You Event