The Islands youngest funeral director is to feature in a new BBC online documentary, due to go live later this month. 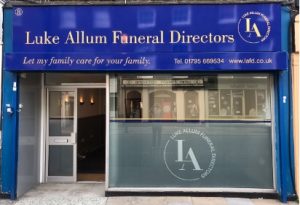 Luke Allum, 25, opened his own funeral directors in the Broadway in Sheerness in September last year, and is already making a name for himself and his business.
Last month producer and former radio presenter and producer for Heart Radio & BBC Radio Kent spent several days on the Island filming Luke at his business & at the Garden of England Crematorium in Bobbing.

Luke said “the half hour documentary is called “Youngtakers” and features some of the youngest undertakers and funeral directors across Britain, including 17 and 18 year olds from Nottingham who came down to Sheppey to film with me”

Luke has been involved in undertaking since leaving Minster College at the age of 15, he said “My Dad got me a job cleaning cars at local funeral directors, and undertaking was the last thing on my mind as a career at the time”
“I worked tirelessly and after 3 months was offered a full time position and remained at the business for 10 years”
After 10 years, Luke decided to branch out on his own, and opened his own Funeral Directors in the heart of Sheerness, after saving up he went into business with his brother-in-law Matthew Locker and opened Luke Allum Funeral Directors.

Luke & Matthew renovated the former toy shop in the Broadway in Sheerness during the summer, and converted it in to a professional hub for grieving families to go to during a difficult time, but made sure they used only local businesses on the island for materials etc.

Luke who has spent all his life on Sheppey, said he met Ben on a stag night, the former Borden Grammar pupils chatted during the evening and said he wanted to feature Luke on the forthcoming documentary he was working on, but didn’t think anymore of it until Ben contacted Luke later to say he wanted to come to Sheerness to film.

The show will go live on BBC iplayer on Monday 22nd January.

Luke spoke to BRFM this afternoon and said “I am hoping to show the documentary at the Playa in Minster for anyone that would like to come along and watch, and thanked BRFM for helping to spread the word”

If the programme gets enough online viewers it will be transmitted on BBC2 in March or April. BRFM will keep listeners updated with the outcome from the documentary going live online.