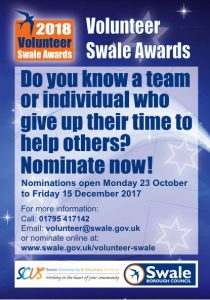 This years categories are:

• Young Swale Volunteer Champion of the Year (18 years or under)
• Swale Volunteer Champion of the Year (19 years +)
• Volunteering contribution to the environment (a volunteer or team in the environmental sector)
• Volunteering contribution to sport (a volunteer or team in the sport and leisure sector)
• Voluntary Project of the Year (recognising standalone projects delivered within the community that focus on health and wellbeing, creativity, culture, heritage or young people. These projects or initiatives could be delivered by voluntary, community or business organisations.)
• Fundraising Award (team or individual, focusing on the method used rather than the amount raised)
• Voluntary Team of the Year (recognising the achievements and hard work of a team – this could be the management team of a voluntary or community organisation, a board of school governors, board of trustees or a coaching team for a local sports club)

One person from all the nominations will be selected as the winner for our Community Inspiration Award.

There are many different ways to nominate that special individual or team.

You can nominate online by completing the online nomination form

In recent years BRFM have been nominated for various Volunteer Swale Awards, including Volunteer Team of the year & Fundraising Award. 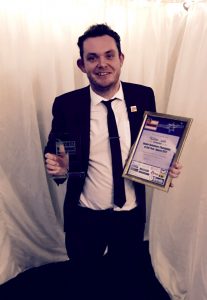 BRFM Presenter Matthew Judd commonly known as “Judders” was nominated in 2017, and took home the title “Swale Volunteer Champion of the Year 2017” at the ceremony at “The Barnyard” in Upchurch in March of this year, after 10 years of voluntary service to voluntary organisations in Swale.

Matthew joined BRFM in the summer of 2008, the day after leaving school and has now clocked up nearly 10 years of service to the station in various roles.

Matthew uses his award to encourage pupils at the Sittingbourne Community College and  The Westlands School to look into voluntary work across the borough, including joining BRFM.